A very large area was excavated to the east of the Lunt Roman fort in advance of the construction of a new Jaguar Land Rover facility.  The site had previously been evaluated by Oxford Archaeology in 2012.  This had identified a few features and, perhaps most importantly, a cremation cemetery.  It was thought likely that this was associated directly with the Roman fort and was therefore likely to be relatively early in date and to possibly have been mainly for Roman soldiers, although The Lunt is known to have had an adjacent vicus.  The site was very large and the underlying geology consisted mostly of sand.  This proved to have caused some unusual conditions for preservation. 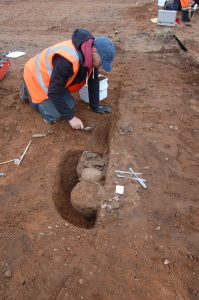 Above : Archaeologist Rob Jones excavates the first part of a rather good pit.

The cremation cemetery proved to contain over sixty burials, many in pots.  The area had been ploughed throughout the medieval period and so some of the burials had been partially truncated.  However, sand is easy to dig, even without modern tools, and other burials had been buried at a greater depth.  Items within burials included numerous complete pots, two mirrors, two glass bottles, brooches, the odd coin (one definitely of Vespasian), pins, a ring with an intaglio and the remains of at least two copper bound boxes.  The star feature consisted of a large pit with 23 near complete pots and an oil lamp.  Human bone survived within the cremations as the chemical changes caused by burning make it almost impervious to the very acidic sandy geology. 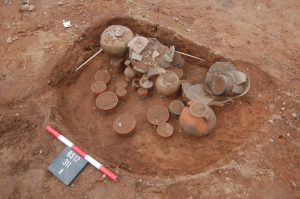 Above: The final view, 23 pots and an oil lamp later

Some finds from the site 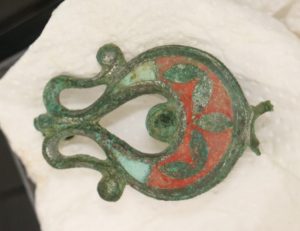 One of the brooches from the above pit, after conservation. 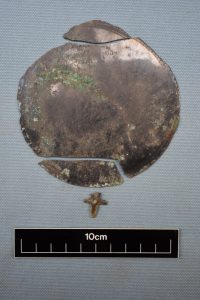 Bronze mirror.  If you have ever wondered how they would work (after all just how reflective is polished bronze?) then this shows that they were silvered. 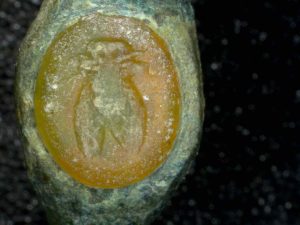 Intaglio ring after conservation, the design can now be seen to be a wonderful bee.

But……the site was not content with only a Roman cremation cemetery.  A small ring ditch was probably the remains of a prehistoric barrow and several other prehistoric pits were uncovered. 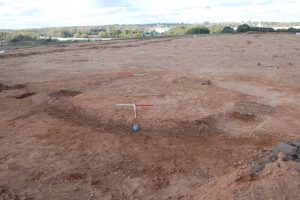 Also numerous Anglo-Saxon features were exposed, including several sunken featured buildings, more commonly known to diggers as grub huts.  A small inhumation cemetery was also excavated although no traces of bone were noted, showing just how acidic the geology was.  Finds included two complete Saxon pots, a complete shield boss and a rather crushed copper alloy hanging bowl.  The unusual nature of the geology meant that some preserved wood still overlay this bowl and a cord around its inner lip, presumably used to hang the bowl, was so well preserved that it looked like you could tie your shoes with it.  This site was also run by Nigel Page. 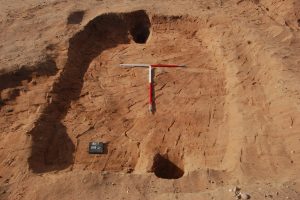 Above: A classic example of an Anglo-Saxon ‘grub hut’ 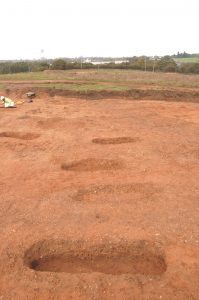 Above: Saxon inhumation cemetery, with no bone surviving at all!  Coventry Cathedral is visible on the horizon at centre left.  The strip of sand in the far distance, on the end of a small ridge, was covered in prehistoric pits and Saxon grub-huts. 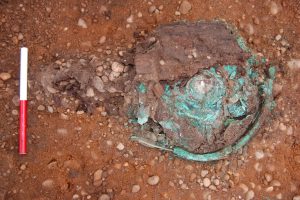 Above: The remains of a copper alloy hanging bowl, beneath a piece of preserved wood.  The hanging cord can be seen protruding from the bottom left of the rim. 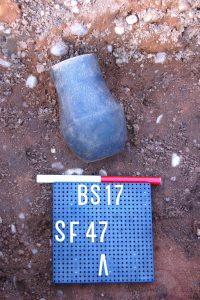 Above: A complete decorated Saxon pot from another grave

We invite you to become a member of one of the oldest county based archaeological societies in the country. If you are passionate about the archeology and local history of Birmingham and Warwickshire, you are in the right place.

We are currently recruiting for a new volunteer positions. Are you passionate about the archeology and local history of Birmingham and Warwickshire? Can spare a couple of hours a week to help us?