Soil stripping on this site, in advance of new house building and following on from an Archaeological evaluation in 2015, exposed a ring ditch.  This had previously been noted on a geophysical survey carried out for the project and had been confirmed during the evaluation stage.  It was generally assumed to be the remains of a barrow, and was expected to date from the Bronze Age.  However, the archaeologists were in for a surprise when one arc of the ditch, encompassing just under a quarter of its total area, turned out to contain five crouched burials.  These have been dated to the Early – Middle Bronze Age and the ring ditch turned out to have two small ‘causeways’ across it, consisting of unexcavated soil.  Therefore it is now considered to be a small henge, or to use the more technical archaeological term, a hengiform monument.  The geology of the site was relatively unusual for Warwickshire and consisted of Lias limestone.  This was fortunate as it is not very acidic and had not dissolved the skeletons too badly.  Current analysis of the bones suggests that the burials were five adults, including one younger and one older individual.  Two of these were certainly male and it is thought possible that they consist of a family group.  Such sites have been rare finds in Warwickshire although a group of 4 was excavated at Bidford-on-Avon by Archaeology Warwickshire in 2015.  The site was run by Nigel Page. 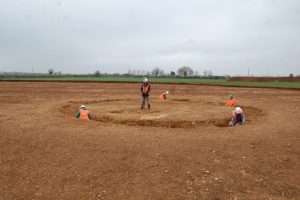 Above: The site being excavated, giving a good indication of its modest size. 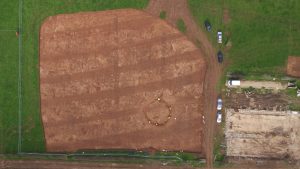 Above: Mansell Farm, the hengiform monument.  Note the clear furrows and how they do not deviate over the top of the feature, suggesting there was never much of an earthwork (such as a barrow mound).  Other linear features are backfilled evaluation trenches. 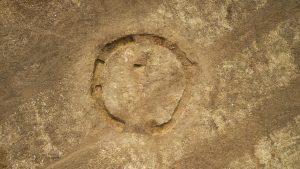 Above: The mostly excavated ditch with the five burials visible in the top right arc

We are currently recruiting for three new volunteer positions. Are you passionate about the archeology and local history of Birmingham and Warwickshire? Can spare a couple of hours a week to help us?

Find out more about our 2021 - 22 programme of fascinating lectures!