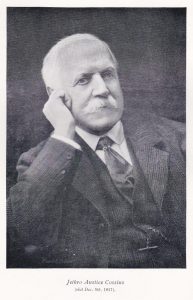 Concentrating on a handful of leading lights in the Birmingham and Warwickshire Archaeological Society – A.E. Everitt, Oliver & Harold Baker and Jethro Cossins who were all active in the field and have left today’s students of Birmingham and Warwickshire history a remarkable resource in various public and private collections. Everitt’s collection of drawings and watercolours of the Midlands once belonged to the Society, but is now in the care of Birmingham Museums Trust, while the diaries and letters of the Baker family, together with the paintings and photographs they produced illuminate the process of recording historic buildings within reach of the city. Cossins was a leading member of the architectural profession in late 19th century Birmingham, designing many significant new buildings in the city, but he was also a committed saviour of many vernacular buildings and churches, working with the Society for the Protection of Ancient Buildings to ensure their preservation. Our meeting is being held on the centenary of Cossins’ death at the BMI. The lecture will attempt to put the work of these pioneers in context and raise awareness of the value of their contributions.

Stephen has been a member of BWAS since the 1960s and has had a long career and distinguished as a museum curator. Early retirement has given him the opportunity to get back to the Midlands and write up some of his research  undertaken on Birmingham and Worcestershire history.

Birmingham Artists, Antiquaries & Architects; discovering and recording the past in the late 19th century.