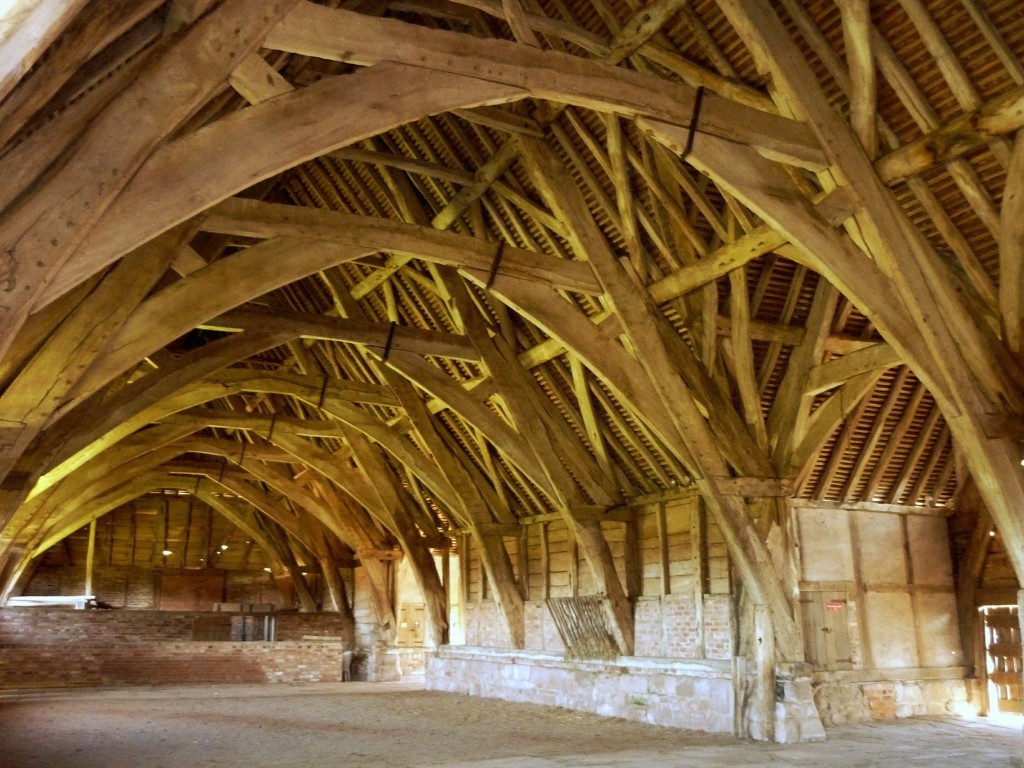 A paper by Francis B. Andrews, a former President of the Society, for BWAS in 1900 described a number of major barns which had been lost and some which were still in existence. He talked about their importance and the need to preserve them. Francis B Andrews  was in fact the president of BWAS.

F.W.B Charles had recorded details of the barn at Bredon just before a fire destroyed most of the roof. He was able to use his research to reconstruct the barn using new timbers spliced into the surviving ones.  Another barn at Pilton in Somerset suffered a similar fate and was also restored through the use of local research.

Cecil Hewett researched the structural joints in the barns of Essex from the 11th to the 11th century to posit a chronology of the development in carpentry and thus date other timber-framed barns. S.E. Rigold did similar work in Kent. There is still much to learn, particularly in the origin and development of cruck-framed barns and the raised-cruck roof.

A number of previously unrecorded barns have recently been excavated, from possible Roman and Saxon ones to later stone foundations as at Southam in Warwickshire. Problems in identifying and dating such finds are: for timber ones the fact that early barns were probably earthfast and so have rotted away completely except for post holes and for both timber and stone barns, the fact that they were used for storage and processing of crops and unless they burnt down, all the organic evidence has gone and there are usually no domestic small finds. The surviving ones were also constantly repaired and modified, but whereas in the case of the manor house, this was probably done for reasons of comfort, fashion and convenience so that alterations can aid in dating, in the case of barns they were pragmatic, ad hoc and responding to the agricultural needs of the time, of which, in the absence of farm records, there is no evidence.

The recording and identification of barns is important archaeologically because it has been estimated that we have lost between 50% and 70% of the barns in England yet for 900 years they were one of the most important buildings in the rural economy. Being able to locate their position, size, structure and date is important to understanding the economy and infrastructure of any community from the Anglo-Saxon period to at least the middle of the 19th century.

The talk will be illustrated but Ken will also be bringing some scale models of some of the barns to view after the lecture.

Tuesday 1 November 2016, 7pm-8pm The Recording and Identification of Barns